Cancer Caregiver? Participate in this Survey... 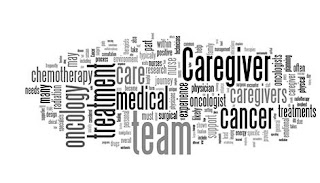 Hi folks -- I'm passing on this information for Alexis, who is studying the ways that caregivers might interact with their support groups. I'll let her tell you all about it...

"My name is Alexis Johnson and I am a doctoral student in the Department of Communication Studies at the University of Nebraska-Lincoln. My research centers on health communication processes, and I am conducting research that I hope will improve our understanding of supportive communication between social networks and family caregivers of patients with cancer. As someone who has provided care to a patient with cancer, I am interested in conducting research that is aimed at better understanding the memorable, supportive messages that are shared with family caregivers in cancer.

You can learn more about this survey by going to the site and clicking on the link on that page. You can also find Alexis' credentials and contact information at that site.
Posted by Unknown at 8:44 AM 3 comments:

How My Husband Died

I haven't written since I returned home from my Dad's house in April, because life was pretty hectic around home. It was good to be back with my husband, Hugh, and daughter, Cora, and we all were pretty busy. I was hired by a travel publication to write an itinerary about our town, my husband and I were working the local farmers' market, he was fixing up the house a bit, and he was anxious to get back on that school bus. I was so tickled about how much he loved driving that bus.

We even had insurance. So, while I was at Dad's house, Hugh scheduled a colonoscopy for himself. He couldn't get an appointment until the end of June, and the doctor called to cancel that appointment and to reschedule for July 6th. Hugh and I never discussed the colonoscopy, other than the fact that I planned to have one later in the year.

The day of the colonoscopy, Hugh said, "I'm afraid they're going to find something." When I looked at him, he told me that he had been bleeding for the past few weeks. My heart sunk, but I had enough experience with mom to know that I didn't need to get morose about this news. Instead, I told him that we could handle anything they found.

What they found was a tumor about the size of New York. When I saw the images that July 6th morning, I felt as though I had been hit up side the head with a 2x4. Fortunately, I was sitting, as all the emotions I had when I first learned about Mom's cancer returned, only twice as large.

The surgeon, one who had taken out my gall bladder four years ago, was optimistic, but wanted to run a few more tests to learn whether or not Hugh was a surgical candidate. They went on to schedule his surgery for Friday morning, July 17th, and his CT scan later that week showed that the tumor seemed contained and only one spot on his liver.

The waiting for tests and for his resection surgery seemed unbearable. He was worried about what they'd find once they opened him up. He was worried about losing his bus driving job and the insurance. He worried immensely about his booth at the farmers' market, and I had shut my arts & crafts booth down so I could run his cheese booth. I kept reassuring him that, whatever we learned, we could make it through this ordeal together.

Other than the farmers' market that weekend, Hugh and I shut ourselves down and spent our days together quietly in the house watching reruns of House of Cards. He wanted to watch the third season, but he wanted to get me up to speed so we could watch that season together. As things turned out, we only made it into the second episode of the new season.

Hugh was wheeled into surgery at 10:30 AM Friday morning. I kissed him and told him I loved him. I left the hospital, because I felt so nervous. I went to the coffee shop where he usually went every morning, and the owner came to me and reassured me that all would be well. I conducted a few more minutes of busy work, then returned to the hospital. Within an hour, a nurse asked me to go to the conference room, as the surgery was over, and the surgeon wanted to speak with me.

When the surgeon arrived at 12:30, he was all smiles. The surgery went "very well," and the lymph glands and liver actually seemed better than they looked in the CT scan. The lymphs were off to the lab for biopsy, and Hugh was in recovery. I could wait in his room for his arrival. The doc even assured me that Hugh could continue to drive a bus in August, provided he didn't lift anything.

I was beyond elated. This news was better than I expected, and I couldn't wait to see my husband to let him know all would be well. So I waited. Then, I fell asleep.

About 2:30 PM, the surgeon walked into the room and wanted to know where my husband was. I didn't know...and I was confused coming out of a deep sleep. He raced out of the room, and the head nurse entered the room to ask about my husband. I told her I didn't know, and she asked me to stay where I was.

Over the next hour, I learned that Hugh wasn't recovering well and that they intended to put him into ICU. I called my brother, and as I was standing in the hall talking, someone yelled, "Mrs. Blair, here's your husband." I looked, and Hugh turned his head to look at me. He was greenish-blue, and his eyes looked so sad. I knew then that nothing was going to go right from this point on.

I watched them wheel him into a room at the end of the ICU hall, and within five minutes I heard the announcement for "Code Blue," and watched as at least ten doctors and nurses ran to his room. At that moment, I felt the floor fall away from me, but I felt Hugh pressing me against the wall, holding me up. He said, "I'm sorry. I'm so sorry." Then I felt the arms of a nurse holding me, and I shrugged her off. She had made Hugh disappear.

Hugh's body was riddled with cancer cells that had compromised his liver. He went into DIC (disseminated intravascular coagulation), he developed a shock liver, and his kidneys malfunctioned. He also, from what I gathered, suffered a seizure and a heart attack. Still, the internist and his surgeon assured me there was hope. They found an artery that had burst after the surgery, so he went back into the surgical theater for another two-and-one-half hours.

During that time, a few friends showed up to wait with me. We had no word, so I felt at least Hugh was still alive. Despite all the alarming news, the internist and nurses kept reassuring me that there was hope. I should have known better after Mom's experience. When so much bad news is on the plate, there's not much room for hope. I later learned that 1% of all resection patients develop DIC and that none of those 1% survive.

Finally, I was able to go see him, but he wasn't really there. There was nothing in his eyes. I think Hugh died when he coded, and that I was just looking at a shell. I asked if I could return home to get a toothbrush and change of clothes, with the promise that I would return quickly. On my drive back to the hospital, I prayed that Hugh would live. As soon as that prayer exited my mouth, my mother was in my head saying, "Be careful what you pray for." I immediately added, "Let him live and be fully functional, if it's your will."

For the next four hours, I watched as they pumped 20 bags of plasma and 20 bags of blood into my husband. I watched as he maintained a 150 heart rate and a blood pressure of 46 over 36. Finally, I asked the doctor on duty what they planned to do. "We'll have a conference in the morning." I just shook my head and said no. We were going to end things now.

I knew I had made the right decision, because the doctor and nurses didn't argue with me. They quietly removed the IVs and asked me if they could shut down the respirator. Hugh was so drugged that he was unable to breathe on his own. I assented and asked them to give him the legal dose of morphine. Then, I just placed my right hand on his heart and held his left hand with my left hand and watched as his heart rate dropped.

All afternoon I had been saying "I'm sorry" to Hugh. I was merely echoing what he had said to me when he held me as he coded. Finally, I realized what I needed to say. I kissed him and said, "Cora and I will be just fine. You can let go now." And, he did. He flatlined at 2:38 AM on Saturday, July 18th, and the unexpected and unrelenting rain that had been pouring all evening stopped.
Posted by Unknown at 1:02 AM 1 comment:

Why Etsy, eBay, Amazon, and Adsense?

Because caregiving took a huge bite out of our family wallet. Also, I've learned that downsizing is imperative at my age. The sales go toward buying time for me to finish my book as well as to pay bills. Adsense is a way to generate revenue, if my readers use it. Thanks for your support!

I'm cleaning out family bookcases (with their permission, of course) and listing books on Amazon for sale. Take a look!

My eBay account holds items "younger" than 1995. Vintage items are on Etsy.